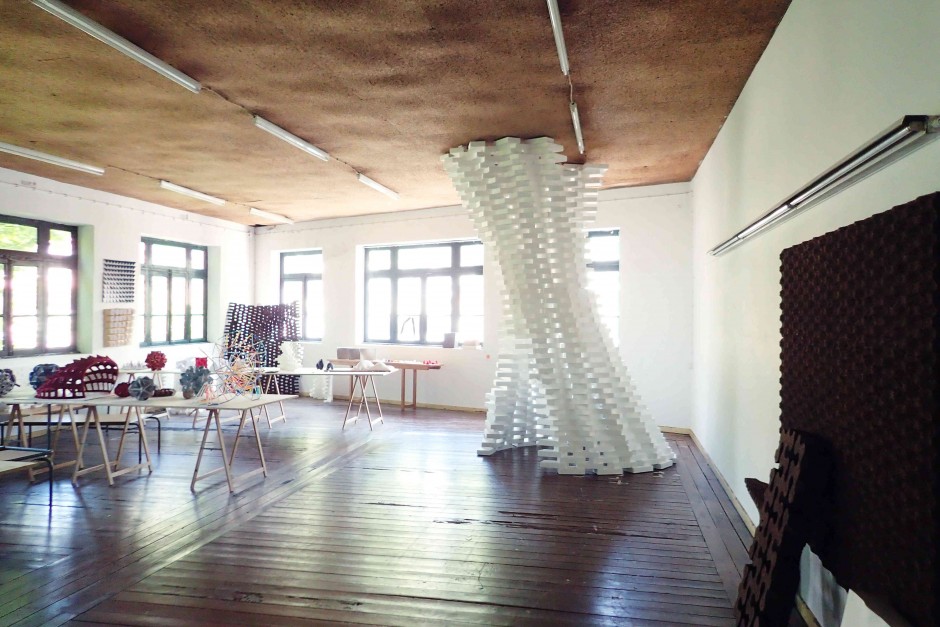 Brick construction counts with a long and rich aesthetic and structural tradition in architecture, which can be traced back to the origins of our civilization. However, despite the remarkable works of Frank Lloyd Wright, Louis Kahn, Eladio Dieste or Alvar Aalto in the 20th century, the brickwork of more irregular geometries is difficult to be achieved by manual means.

In this context, the Brick Tower experiment was developed to compare two assembly techniques: a robotic and a manual one, aided by a video projection technique. To assure the same geometric conditions in both situations, the geometry of the Tower was thought with central symmetry in order to be made out of two identical parts. Thus, using computational design, the surface information of half of the Brick Tower was converted into an assembly of bricks to be fabricated with both processes. The robotic assembly experiment was the first one. The programming was based on previous tests, the setup used the vacuum gripper tool and included a wooden ramp to serve as a brick dispenser. Initially, a basin with glue was used to dip the bricks before placing them in the structure, but this automated process was abandoned because it wasted too much glue. The manual assembly implied fixing a video projector over the table. Using parametric design, the sections of the different bricklayers were generated and then conveniently deformed in perspective, to ensure the right proportion of each unique projection. In both experiments, due to limitations in moving heavy weights in the Laboratory, the material used were EPS bricks cut with the size of the ceramic ones. In both scenarios, the glue was manually placed over the bricks.

This test proved the highest precision and speed of the robotic fabrication process. However, in those circumstances where this technology is not available, the proposed manual system can be an interesting option to overcome the human limitations when interpreting and assembling irregular brick structures. Both experiences contribute to keep alive the art and traditions of brick construction today. 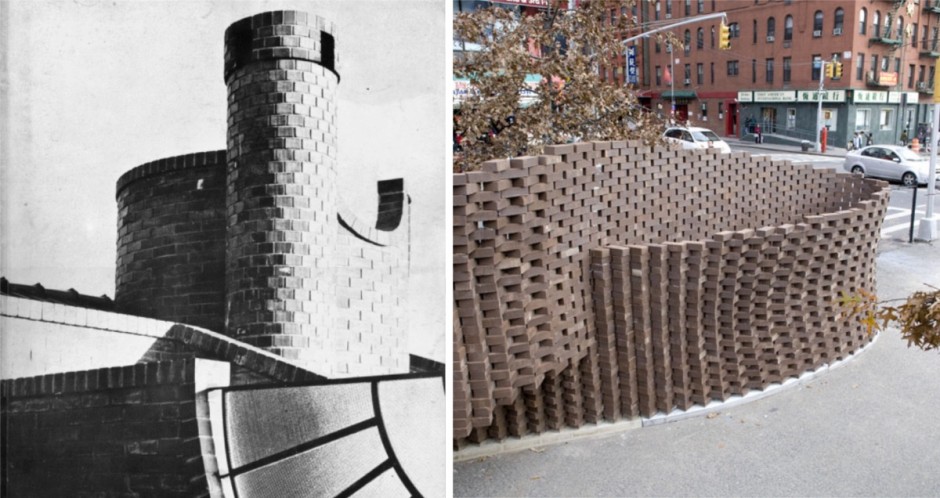 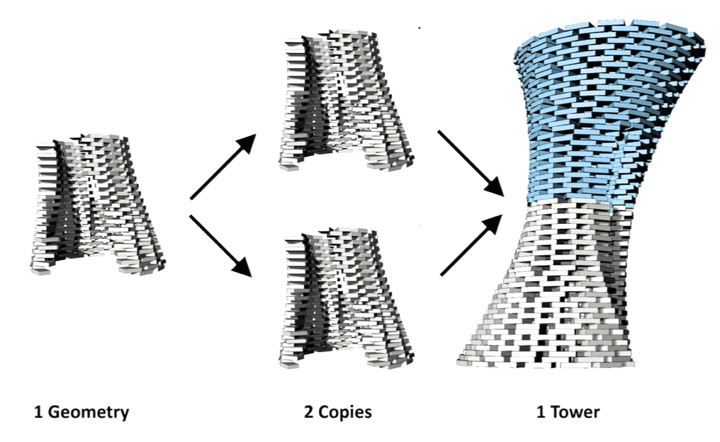 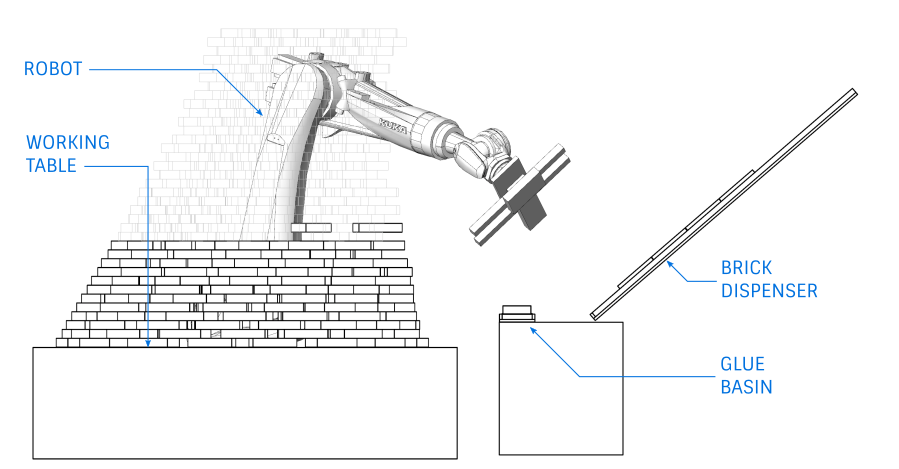 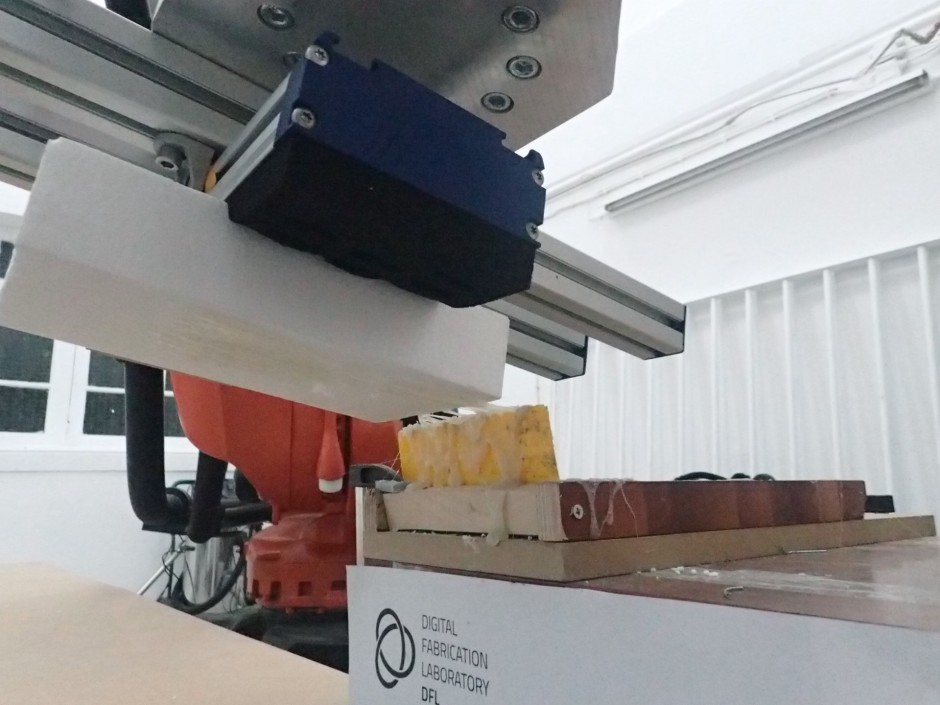 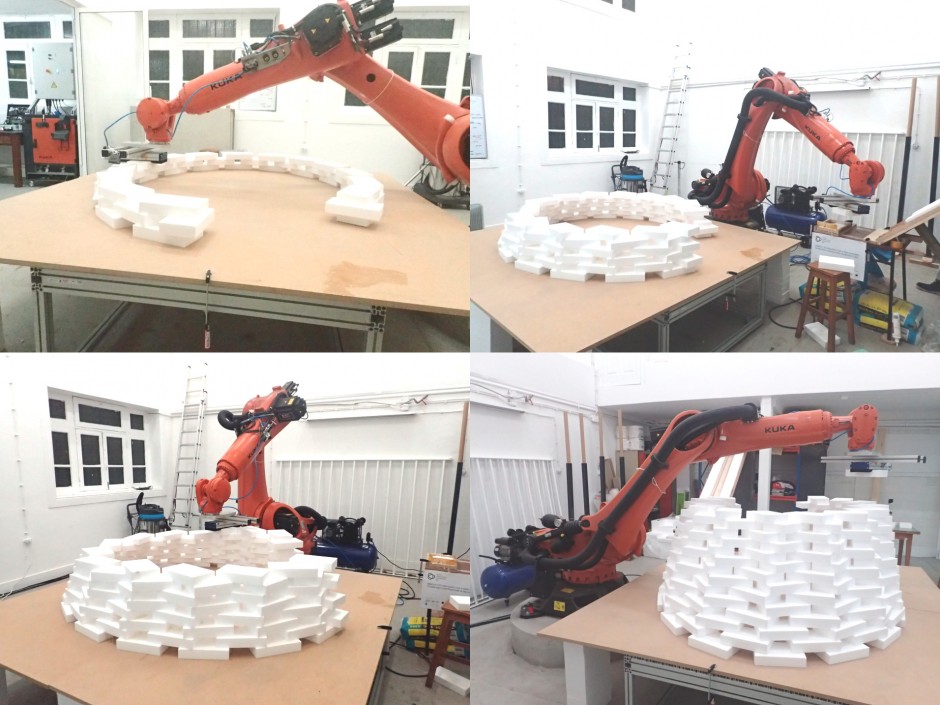 The human approach used 467 bricks along 36 levels. The positions of the bricks were projected in the construction with a video projector. These projections were calibrated to mimic the perspective seen by the projector and all the work was carried out manually, from positioning to glue pouring. The average time per brick was 20 seconds. 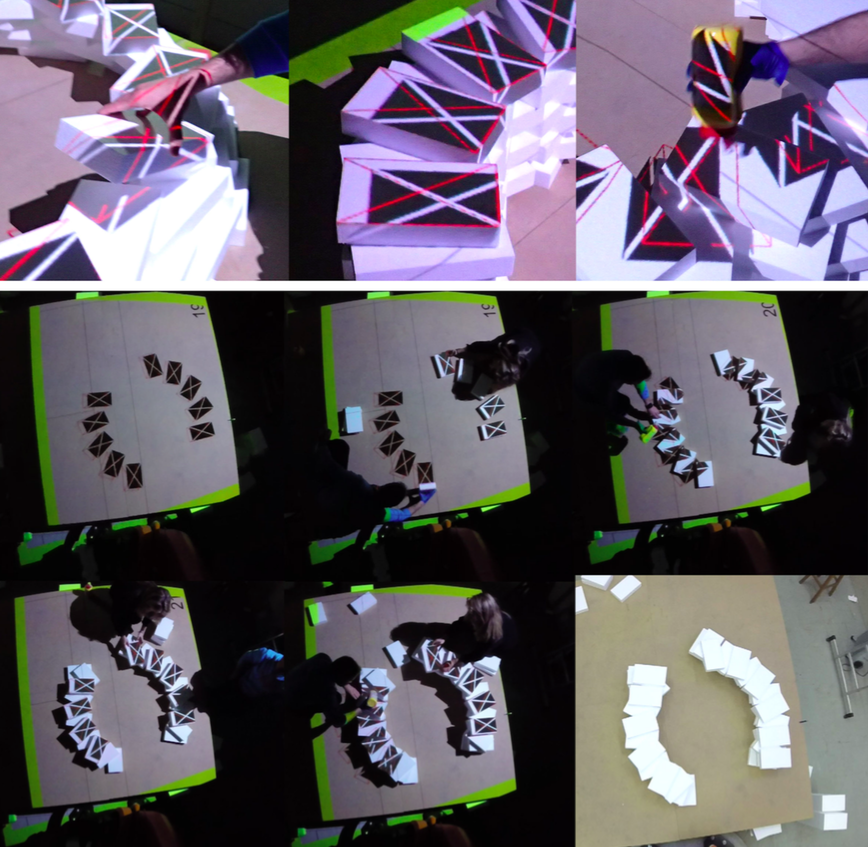 After fabrication, each of the two halves was transported to its final site. The transport was carried out with 4 people, one on each corner of the structure. The side with the open slit was transported on top of a wooden plank so that distance between bricks was maintained.

Of the two halves, the second was lifted in the air, rotated and laid on top of the first, with visual alignment. Glue was poured between the two structures and additional bricks were put between the structure and the ceiling for securing the final assembly. 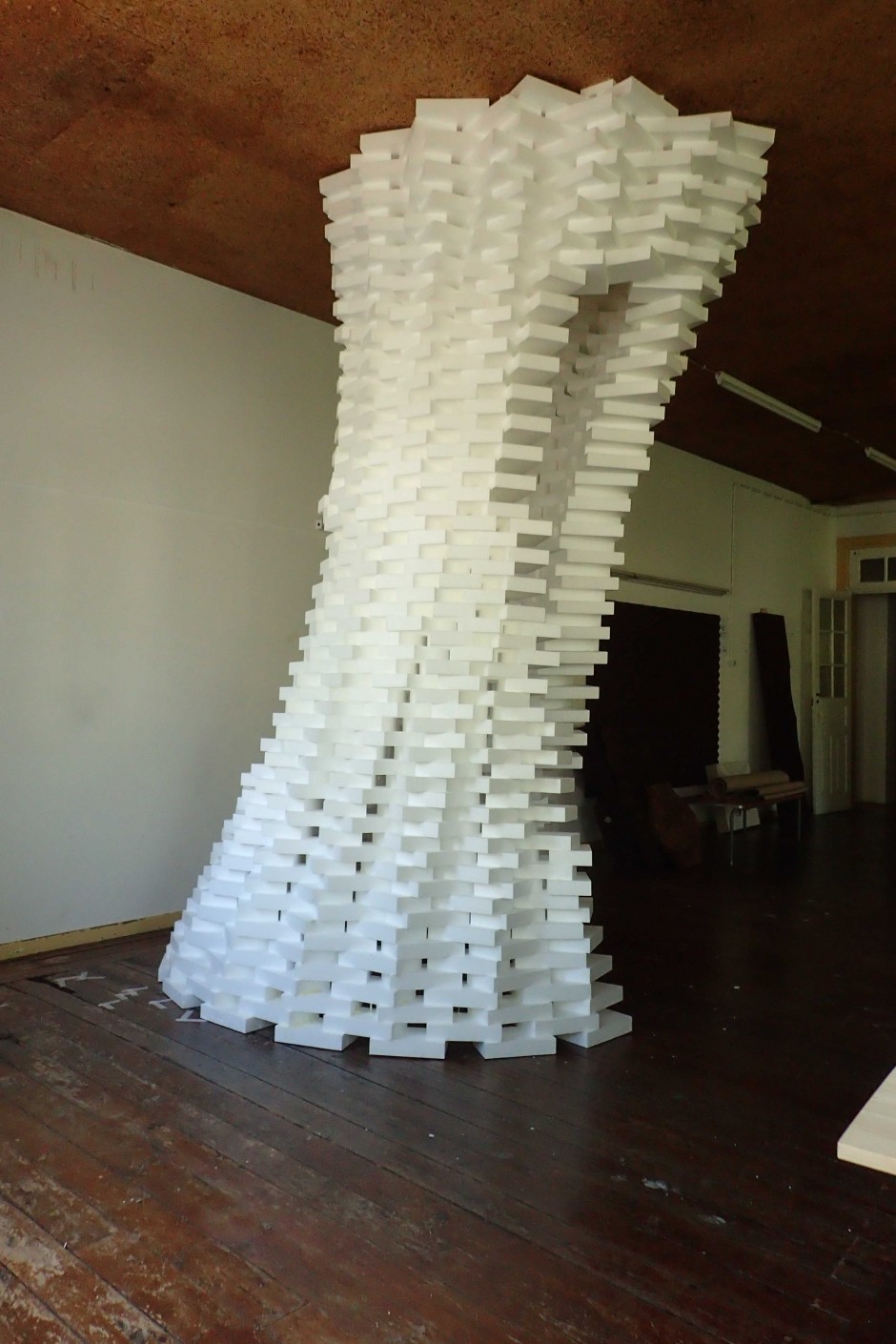 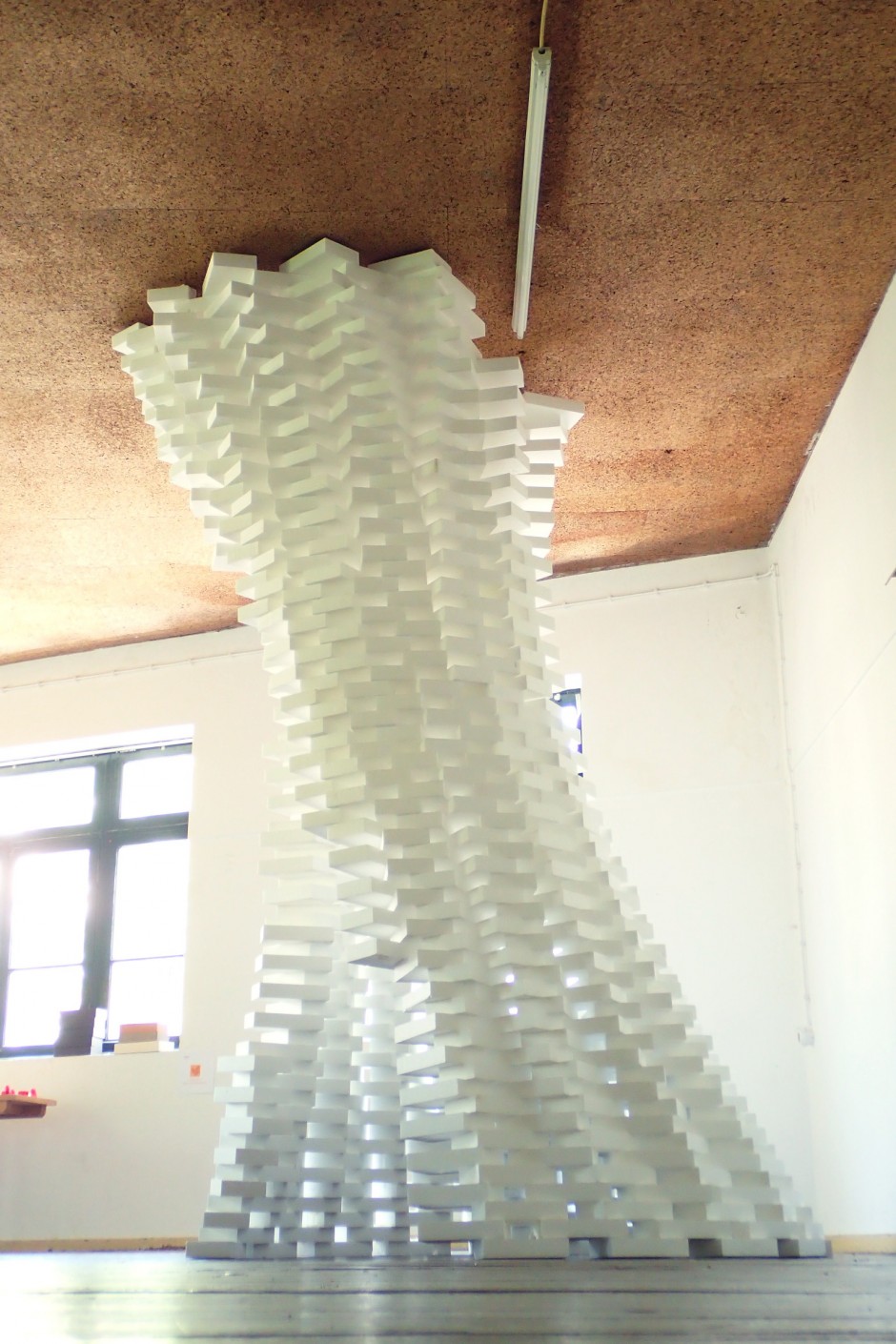